Pinholes with the Intrepid 4*5 camera

I’ve shot a few large format pinhole images with my Intrepid 4*5 camera recently and wanted to share with you some of the images and my thoughts about the advantages of using the Intrepid as a pinhole camera. 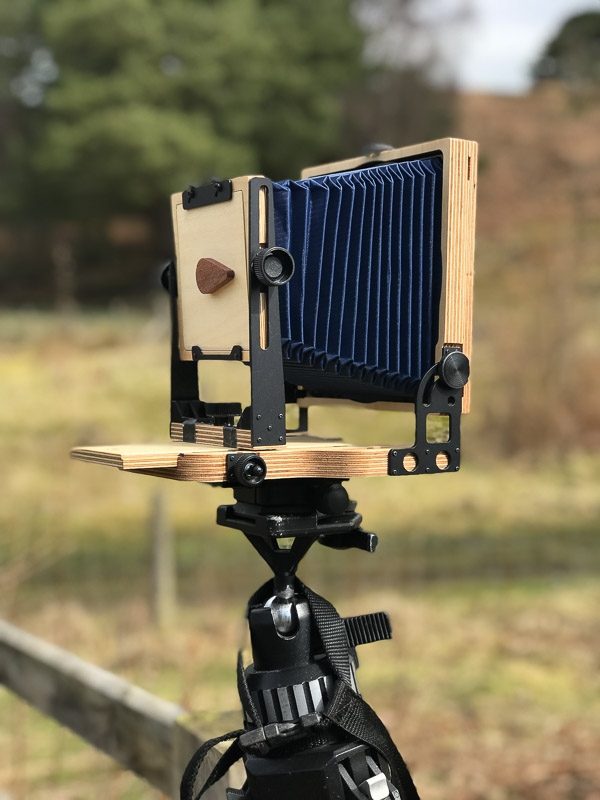 Above we can see a pinhole panel attached to a Mk 2 Intrepid 4* camera. The wooden pinhole cover just moves out the way when it’s time to make an image. There is no cable release, which a few pinhole cameras have.

The current design of pinhole offered by Intrepid is slightly different cosmetically but it looks like the mechanism works in the same way. The Intrepid 4*5 cameras take a Linhof/Technica style lensboard and therefore the pinhole could be bought on its’ own and fitted to any large format camera that takes the same type of lensboard. I’m sure there are also other sellers that can supply pinholes mounted in that type of lensboard.

If you already own an Intrepid, or are planning to buy one, then you can add on a pinhole for just £25. I know that’s not particularly cheap for a piece of wood and, er, a hole, but it is probably cheaper than any other way of doing large format pinholes, except for DIY options.

When you consider that the Harman 4*5 pinhole camera costs around £165, and offers no growth path to allow its’ use as a lens-based large format camera, you might find it’s worth spending a little more to get an Intrepid, even if you only use it for pinhole at first and save up for a lens or two in future.

Another advantage is that you can set the projection distance (ie the distance between the pinhole and the film plane) at any value between the minimum focal length useable by your camera, and the maximum useable focal length. In the case of the Intrepid Mk2, that is between 75mm (very wide) and 300mm (short telephoto). Think of it as being like a zoom function for pinholes.

The image above shows the front panel with upwards shift applied, ready to take the shot below. The Mk2 Intrepid 4*5 camera allows upwards shift, downwards shift, and horizontal shift, as well as swing, and tilt. (The Mk3 also adds swing and tilt on the rear standard). When using a pinhole, shift movements have the same effect as they do when using a lens. Swing and tilt movements have no effect with a pinhole, since everything in the scene is out of focus to the same degree  and altering the lens plane makes no difference.