Welcome to my 114th blog post, which I will use to describe some toning experiments with gelatin silver darkroom prints. I’m trying to spend more time in the darkroom and become more organised; so for example I’ve been producing contact prints for most of my sets of negative to make it easier to pick out the ones I want to print. It’s a bit of a chore but it will be worth it in the long run.

I’m also trying to plan my use of toning so that I’m more likely to know in advance what toning I want to apply to a particular negative. I’m not entirely new to toning, having used sepia and selenium, but my useage has been a bit ad-hoc and not properly documented. I’ve liked some of the results and not liked others but haven’t been able to remember what toning regime produced which results.

I also wanted to understand better the interaction between paper choice, developer choice, and toners. Most of my darkroom printing is with two resin-coated papers:

These papers are developed in one of two paper developers:

I then have two types of toner available:

It sounds like a small range of materials but when you work out all of the different variations of paper, developer, untoned, toning with one toner, and toning with two toners, there are actually twenty different options. A spreadsheet came in handy to list the options: 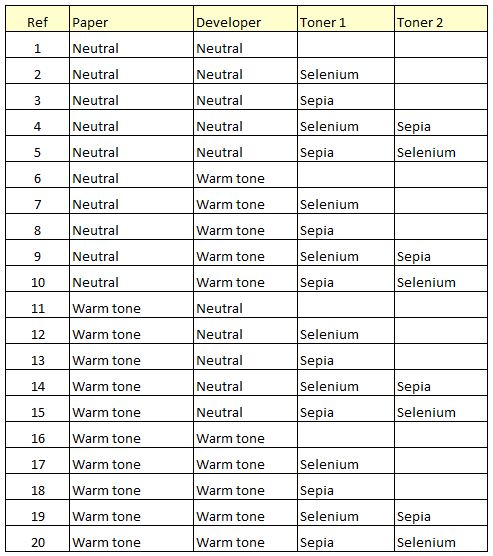 A wet Bank Holiday Monday seemed like a good time to spend several hours in the darkroom so I set off to print 20 versions of the same image. I chose an image, taken in the Yorkshire Dales at Norber, which would produce a reasonable result as a straight print without dodging and burning, as I didn’t fancy having to replicate the same dodging and burning sequence twenty times.

I was aware of advice to produce a darker print where sepia toning is intended, and a lighter print where selenium toning is intended, but I decided to print them all at the same time so that the effects were visible in the reference set of images which would be my end results. If I had made exposure time alterations to individual prints, I probably would have then forgotten what adjustment had been made.

The sepia toner used was Fotospeed ST20, diluted 1:19. This toner comes with an additive which can be used in varying amounts to influence the colour of the toner image. I used 15ml per 1 litre which is designed to produce a tone called, er, “sepia”. So that’s stronger than “yellow/light sepia” and weaker than “dark sepia”.

The selenium toner used as Fotospeed SL20, also diluted 1:19. This is a fairly low dilution which is intended to provide archival permanence and to strengthen the dmax, but not to provide noticeable colour changes.

Unfortunately, I did make a mistake in the execution of my plan, and failed to print image 17, which should have been on warm tone paper, developed in warm tone developer, and toned with sepia. I didn’t notice until after I’d discarded the warm tone developer (the neutral tone sits in a Nova slot processor where it lasts for weeks). I’ll try to go back and produce the missing print and update the results when I can.

I’ll now post the results in batches. Click on any image set to get a larger view. 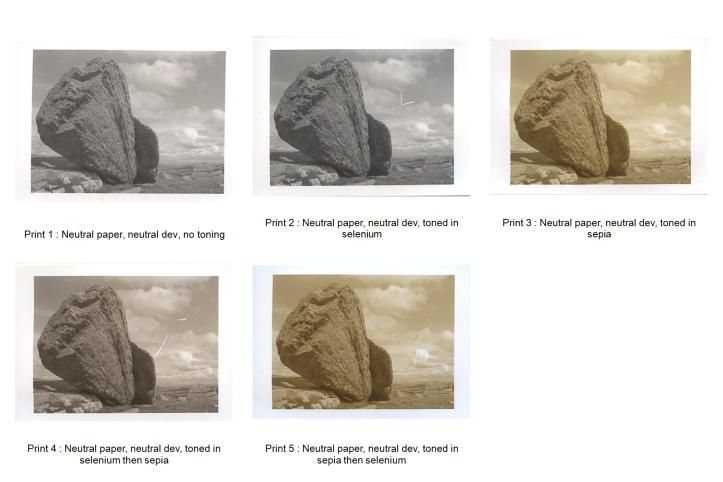 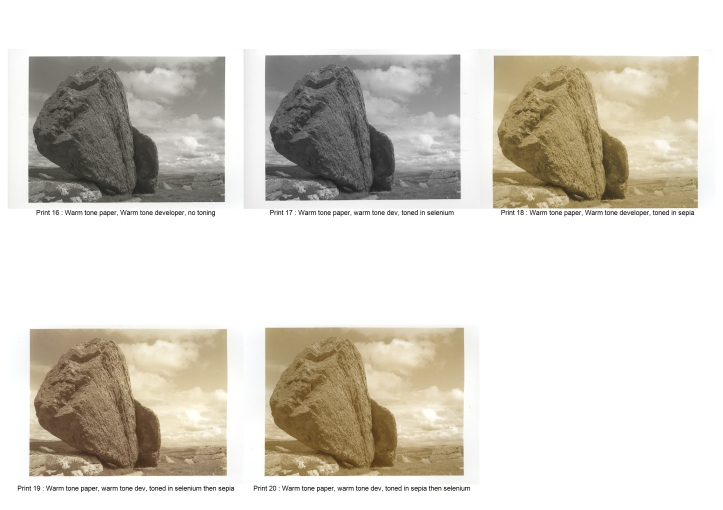 I’m not going to attempt too much analysis of the results right now and will just let the images speak for themselves, for a number of reasons.

First, it’s not a  case of finding the “best” combination because the result I like best for the image I used for these tests, might not be the combo I like best for a totally different image.

Third, I need more time to assess and compare the results.

I will however post again with some more thoughts, including comparisons grouped in different ways, e.g. the effect of changing developer without changing paper.

I hope you found the results useful – I certainly did. I should stress that I am in no way an expert in toning – if you want to learn from someone who is then have a look at the tutorials from David Kirkby at Twelve Small Squares. David is a fellow member of the Film and Darkroom User Group and posted a link to his tutorials just before I carried out these experiments. I found it very instructive to see David’s results – but doing it yourself is even better because the learning sinks in better through practical exercises. I produced very small prints (about 5″ * 3.5″) to keep the cost down.

b) There are a whole load of variations possible within the toning process (for example dilutions and timing) so these results are only one of many possible sets.

Oh, and apologies to those who read this post before I had actually finished writing it – I pressed the publish button too soon !