Glen Affric trip – Day 4 – a ducking for the Yashicamat

The WalkHighlands website again served as my guide for Day 4 of my Glen Affric trip as I set out for the Loch Affric Circuit on what turned out to be a very wet day. I should have taken more notice of the line in the route description that reads “stream crossings may be hazardous in wet weather” … more about that later. As this was billed as an 11.25 miles walk I decided just to take the Yashicamat 124G and a tripod, and leave the Mamiya RZ67 behind.

I had one frame of Rollei IR400 film left in the camera from the previous day which I used to take the image below, approaching Affric Lodge. Some of the images on the film weren’t brilliant due I think to poor processing on my part; as this one was a bit grungy I decided to grunge it up some more with Adobe Lightroom.

At this point it was raining softly and I was beginning to wonder why the guides made a fuss about stream crossings. I did come to one spot where a stream decided to divert itself down the path, and a bit of boulder-hopping was needed, but nothing difficult. 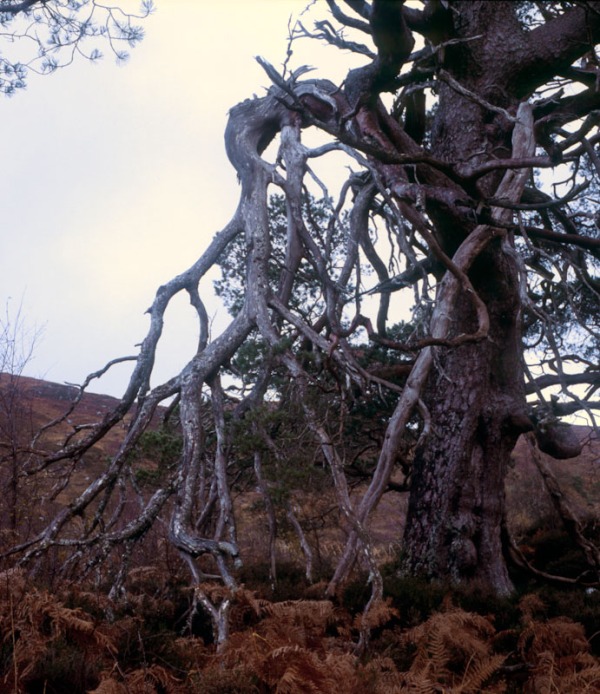 By the time I arrived at this bridge crossing the Allt Coire Leachavie, (Allt just means stream) it was starting to rain harder, and I could also see more clearly the effect that rain in previous days was having on the amount of water running off the hills. I also managed to drop the Yashicamat in the stream at one point and was a little worried about the effects (try doing that with a digital). I’m happy to say there were no ill-effects, even though I could feel the film was wet when I loaded it for processing a week later !

After another couple of hundred metres I got my first glimpse of the Allt Coulavie, and specifically of the series of waterfalls called “Sputan Ban” which tumble down for about 700 metres. Now, anywhere in England, this would be a well-known feature, endlessly portrayed in gudebooks, and perhaps with two coffee shops, one at each end. But here in the Scottish Highlands, it just passes as one more stupendous sight in an array of natural wonders. If you search on flickr right now for “Sputan Ban” you will see just four images, and two of those are mine.

As I wandered along I admired the scale and force of the falls but it hadn’t yet dawned on me that I was going to have to cross this raging torrent, if I was to follow the full “Affric Circuit” walk. Perhaps because an estate landrover track had veered over to the right into a side glen, perhaps for deer-stalking, the quality of the track was deteriorating and there was no bridge over the Allt Coulavie, and in its’ current state boulder-hopping was not feasible. I had read somewhere that walking upstream might provide a better crossing option. 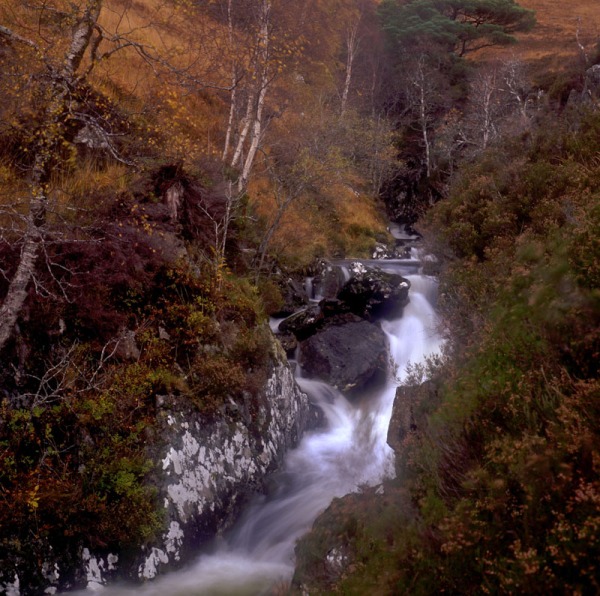 By this time I’d changed to Velvia 50 and the weather required 1s exposure at f11; I quite like the resulting movement in the heather.

So I wandered slowly up the side of the stream, admiring the views, stopping for photographs, noticing that the rain was getting heavier all the time, and slowly realising that a crossing point was unlikely to be found.

Nearing the top of the falls I stopped to take my last image of the day before consigning the camera to the rucksack.

The shot as taken on Fuji Velvia 50, above, has some strange colours – almost as if it had been cross-processed, i.e. slide film processed in C41 chemicals, but that wasn’t the case. Anyway, I generally find that waterfall shots work best in mono, so here’s the mono conversion.

Soon after this point, the gradient eased off and it probably would have been possible to cross over the stream, climb down the other side of the falls, and resume the route around Loch Affric. But I’d spent so long clambering up besides the falls, and stopping to take images, that I doubted that I would complete the route in daylight, as it would be dark by 4.00pm. I also suspected that the rest of the route would, relatively, be routine after the thrill of observing these falls.

The OS map showed a path going diagonally down the hillside, and back to the footbridge where I’d enjoyed lunch. The path turned out to be more of an indication of a possible route than a firm guide .. on the damp slippery slope I fell down and got soaked so many times I figured that if I had taken my boots off and waded across the stream I couldn’t have ended up any wetter.

On the return route, the days’ rainfall was visibly increasing the amount of rain on the path by the hour, and I soon realised that I needed to replace my old waterproof coat. When I got back to the car, I was totally soaked and tired, had failed in my original objective, but had enjoyed a great day !

Photographically, the decision to take just the Yashicamat (and the middle-sized of my three tripods) was the right one for weight reasons, although having a wider lenses would have been handy at one point. I wanted to take more slides with the Yashicamat, in the hope of getting a few to mount in a very old 6*6 slide projector I had been given; but I would have obtained a higher proportion of “keepers” with colour negative film.