I started to explore the world of infra-red photography last year with a couple of rolls of Ilford SFX200 film. I liked the results well enough but I wanted to see how other films would compare. Ilford SFX is, strictly speaking, a “near-infrared” film whereas Rollei IR400 is a true infrared film.

On the last afternoon of a week-long photo trip to the Outer Hebrides, I found myself in Stornoway in very bright and hot weather. The kind of weather that you might normally think of as a dead loss for photography. But I remembered two things:

a) Bright, sunny conditions help maximise the infrared effects
b) I had a roll of 35mm Rollei IR400 film with me “just in case”.

I also knew from research that there was lots of trees, and greenery in general, in the grounds of Lews Castle, which would be a good place to test out the infrared film.

Decidous trees and grass reflect infrared light which leads to the “Wood effect ” which makes them appear white on infrared images.  The name has nothing to do, funnily enough, with the wood material in trees, but is named after the inventor Robert W. Wood.

The base ISO rating of the film is 400, but when you add an infrared filter, such as the Hoya R72 filter I used, you have to add between 5-7 extra stops. The exact amount really requires experimentation, and varies from scene to scene, because you cannot see how much infrared light is being reflected with the naked eye in a particular scene, and you won’t know the result until the film is developed. Ideally, you would bracket every shot, but on this occasion I took a number of images of broadly similar subjects and changed the exposure from one image to another, in the hope that some would be OK. Probably my most commonly used setting was 7 extra stops, which means an effective ISO of 3 …. aperture was always f11 and the resulting shutter speeds between 1/4 sec and 1 second. Clearly a tripod is essential.

My first challenge was to load the film, as you’re supposed to do this in subdued light, and it was very sunny. I sat on the grass in the park, outside a quirky cottage, pulled my newly-acquired “breathable” bivvy-bag over my head, and loaded the film into the Pentax MX inside the bivvy bag. Actually there was quite a lot of light coming through the bag, and I did get very hot as well as presumably looking very strange. But no light leaks showed up on the film so all was well. 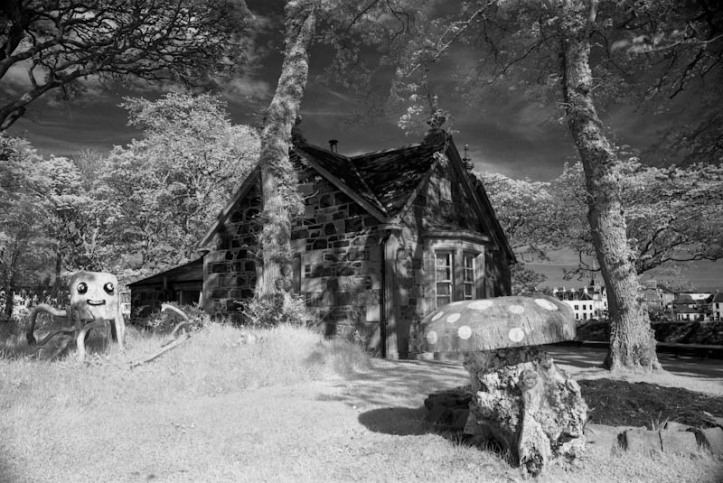 Here’s the quirky cottage which was my first subject. 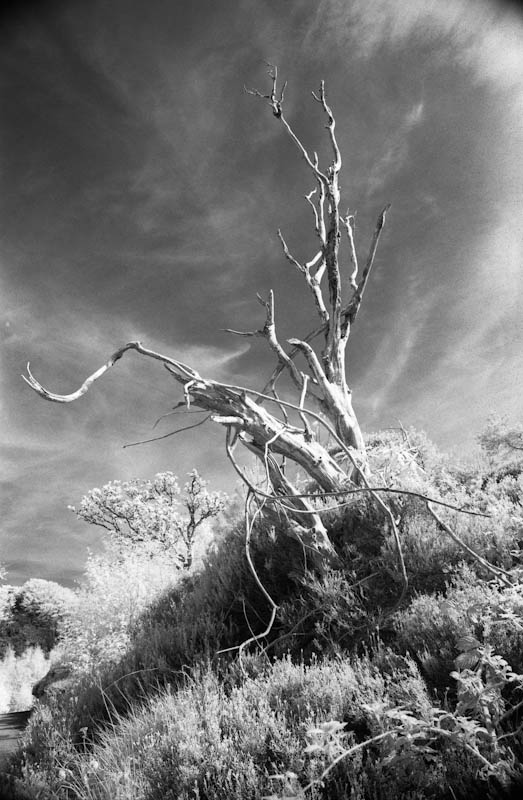 The dead tree above was pretty much white already, it’s the bushes around which have changed colour, and the sky is darker than it would be on “normal” film or in a digital image. 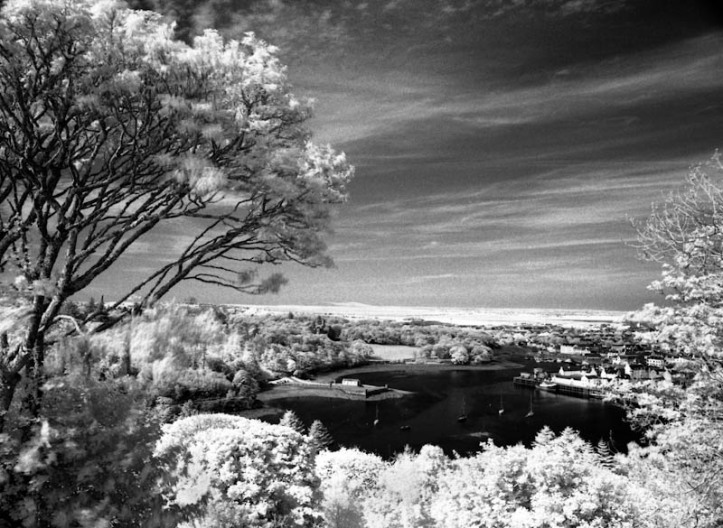 The shot above is from the top of a hill which provides a good view of Stornoway harbour and town.

… and this is from the bottom of the hill on the way back towards the town. You might make out the “castle” in the distance, but as the building was covered in scaffolding at the time of my visit, I didn’t take any photos featuring the castle by itself.

I took a few photos without the R72 filter, because I had read that the Rollei film could be used as a reasonable general-purpose film, of moderately fast ISO. Here’s a comparison with and without the filter.

Notice the communications mast in the centre of the above image ? Now look at this photo which was taken without any filter:

As well as the lack of the “Wood effect” in the second image, it is noticeable that the communications mast is totally invisible in the second image. Obviously it didn’t move, so my explanation is that infrared film is very good at cutting through the haze which was quite heavy on that day (I remember Ansel Adams makes that point in “The Negative”, I didn’t just make it up).

It’s not a very fair comparison because, when not using a special-purpose filter, I would almost always have a UV filter attached to a lens, for protection if nothing else. On this occasion I just took off the Hoya R72 filter and didn’t put anything in place. It’s easy to forget that the UV filter is also providing an optical purpose in cutting out SOME of the haze and a more relevant comparison would be the IR photo and one with a UV filter in place.

I did take a photo early the next morning in Tarbert Harbour, waiting to board the ferry home, when I either had a UV filter mounted, or it wasn’t hazy anyway. This perhaps gives a better idea of how Rollei IR400 film operates in “non-infrared” mode:

So what impression did I form of Rollei IR400 film ?
Well, I do like the results obtained, with a strong IR effect – stronger than the Ilford SFX 200 film I had previously used. Just as with the SFX film, I did find this 35mm Rollei film to be more grainy than I would like. There may be two reasons for this:

a) I’m rather spoilt by using Kodak TMax 100 for general black and white photography, which has almost no visible grain, particularly in medium format.

b) I developed the film in Rodinal (1+25 dilution for 7.5 minutes) and another choice of developer might have produced less grainy results.

I’d certainly like to use the film again, but I’ll probably use medium format IR400, mounted in my Yashicamat twin lens reflex, to reduce the grain problem. Using the Yashicamat means I don’t have to keep taking the filter off for composing (sometimes I forgot to put it back on before pressing the shutter on the Pentax MX) because the filter goes on the taking lens and composition happens through the viewing lens.

If you want to read some comparisons of different infrared films, there is a good resource on the Digitaltruth website.

Finally, I’d like to show what happens when you grossly overexpose this film. I had used a mixture of 50mm, 35mm, and 28mm prime lens on the Pentax MX in this shoot. All were purchased second-hand – the camera body and 50mm lens was £59 and the two other lens £30-35 each. However, I hadn’t realised at the time of shooting the film that the 35mm lens had a fault and wasn’t stopping down properly. So the image below was probably overexposed by up to four stops (ie on top of the 7 extra stops to allow for the filter):

There was almost nothing to see on the negative but the scanner (Epson V700) and Adobe Lightroom were able to salvage something. Of course it won’t win any prizes but at least it provides a memory of a nice place I stopped to cool down on the way home. This is the River Pattack on the A86 west of Laggan. It was 29.5 degrees C in the car, which is pretty unusual for Scotland !